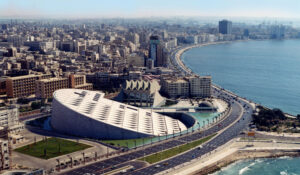 Located in the historic center of the Egyptian city of Alexandria, along the coast of the Mediterranean Sea, the library supports 11 floors with more than 4 million books.

The project was promoted by the Egyptian government and support of UNESCO, to recover the mythical enclave of antiquity. Its construction, which is mainly defined by a tilted cylinder with a deep angle, was completed and inaugurated in 2002 by the Norwegian studio Snøhetta and local architect Hamza Associates. 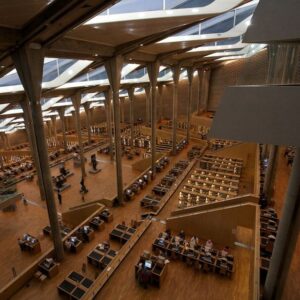 Inside the building, predominates the concept of an open amphitheatre with seven stepped terraces and uniform lighting. The entire reading room is one of the largest surfaces in the world. 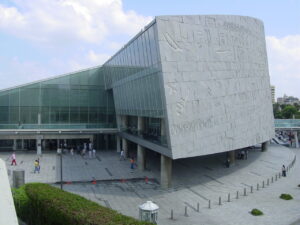 The exterior wall covered in granite with characters of the best-known alphabets protects the building. The library includes other cultural and educational functions such as a planetarium, a school of information sciences, several museums and conservation facilities.

Around the building rests an open square and a swimming pool with a pedestrian bridge that connects the city with the University of Alexandria.

You can find out more about which cookies we are using or switch them off in settings.

This website uses cookies so that we can provide you with the best user experience possible. Cookie information is stored in your browser and performs functions such as recognising you when you return to our website and helping our team to understand which sections of the website you find most interesting and useful.

Strictly Necessary Cookie should be enabled at all times so that we can save your preferences for cookie settings.

If you disable this cookie, we will not be able to save your preferences. This means that every time you visit this website you will need to enable or disable cookies again.

This website uses Google Analytics to collect anonymous information such as the number of visitors to the site, and the most popular pages.

Please enable Strictly Necessary Cookies first so that we can save your preferences!